Day 2 of the Leaving Cert for the Entire Country – The English Literature Paper.

Lots of discourse on this on line and the same two grind teachers quoted in all the rags. 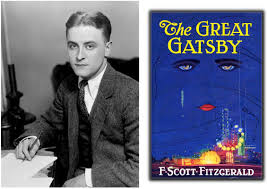 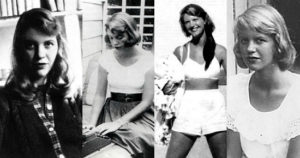 Do teenagers actually read literature any more? Outside school that is? They ‘d have had a pretty hard time of the Higher paper if they didn’t. Some of the language would make your toes curl! I studied English Literature for A level and I am pretty sure we weren’t asked to discuss how the personal integrity of characters enabled us to shape our impressions of the general vision of a text. I am not sure even that I know what that means! My son answered that question, hopefully he knew what it meant!

Hopefully the three visits to the bard’s Macbeth on stage paid off and there was no drama for the drama paper!

Everything was much calmer for everyone today as a good nigh’s sleep was had by all, (and the general consensus was that everyone liked the Yogi Bedtime Tea best). I supplemented the tea with the herbal sleep potion and a constitutional homeopathic remedy last night and we were all good this morning. 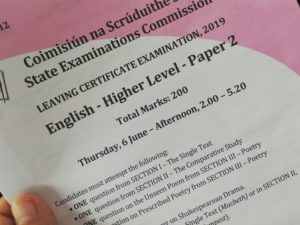 Lunch of the day;  fruit platter, as no stomach for loads of food before the exams.

Tip  here  would be to keep lots of fruit in the fridge; berries strawberries raspberries blueberries as they have  sa forpep  chool you up feel  houand an are full of vitamin c and antioxidants. Also on a nervous stomach  the they before can just exam easy tiny amounts.

Also a wise move for steadying of the nerves and also last minute revision was to go into school an hour before the exam and relax into the new surroundings. 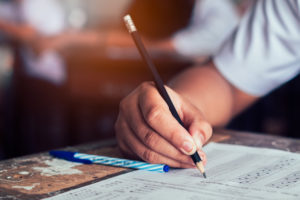 The writing game ain’t over yet.

Even the students who have an exam on an afternoon and then have TWO exams the following day (of THREE HOURS a piece), will spend 9 out of 27 hours  hours writing. With a pen! Not with predictive text! Hard at the best of times, but particularly hard for this Borg generation.

Today our fella has his toughest day of the entire Leaving Cert. He has to perform in Geography (a very trickly timed exam) and Mathematics. Some wag has obviously thought Maths in the afternoon would be a laugh. Hopefully no one falls asleep during it from a combination of sheer terror and exhaustion!

I am pretty convinced that I don’t know anyone whose kid does Engineering, Home Economics and Geography, but its terrifying and possible.

I do however know someone whose kid has 5 days of double exams . . . . in a row. That is just pure insanity. Judging two years worth of study and work in a three hour exam is bad enough, but stacking those exams in that way is just plain ridiculous, especially when you consider that some children may only have the one double header and others are facing FIVE. It’s hardly fair. But we all already know that there is a lot in the Leaving Cert that is not fair. Its not fair that some children are good at irish and will sail through a mandatory subject whilst other kids will have to carry it and take up another subject to make up points, its unfair that kids who are good at maths will be doing the same, its unfair that some subjects are continually assessed and others are not, its unfair that some families can support their children academically and financially, it’s unfair that some kids will be unwell and have to continue none the less . . . . the list is endless.

However, whilst some of these issues cannot easily be dealt with, some of them can be easily dealt with. Why can we not spread out the leaving cert into that third week so that subjects that most students sit should not have to be done two in one day?

Subjects that have to be sat together in one day 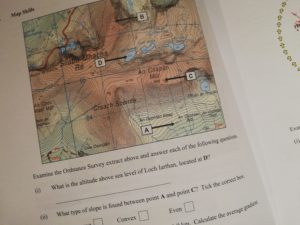 Examples from this year

The one double header that everyone has is on Monday when Irish and Maths comes together as a gruesome twosome for everyone, but every other twosome should be avoided. Can we not pair all the commonly sat subjects with the less commonly sat subjects? In particular we should try to ensure that Maths English and Irish are sat equally; not having some students sitting Geography before Maths or Biology after Irish or Home Economics after English and other students just sitting the mandatory subjects of Maths English and Irish on their own and having the luxury of more revision time before and after these subjects.

For the first time this year the Leaving Cert will extend into a THIRD week. Just for two days of the third week with the last exam not being religious education as was customary, but is now politics and society three weeks after English Paper 1.

Now that we have broken the mould, can we not extend this to the end of the week and really give our students the best possible chance to show off their skills in what is already a very narrow form of assessment?

The same two exams on one day appears every year!

Now all you people reading this whose kids are not currently doing the Leaving Cert, listen up. The Leaving Cert Timetable IS THE SAME EVERY YEAR. Here is the proof from 2015, 2017 and 2018. 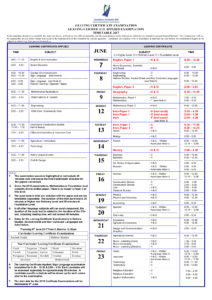 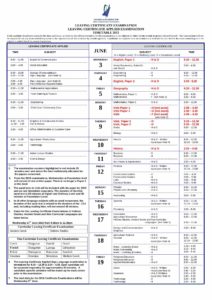 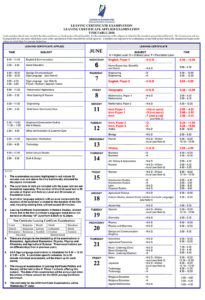 So if you have kids coming out of transition year and starting 5th year bear in mind that if they are doing the subject  choices listed above THEY WILL HAVE A DOUBLE HEADER. So if you want to have an easier LC timetable choose your subjects carefully and wisely!

Wouldn’t it be great if no kid that didn’t want to do Irish and Maths would simplly be allowed not to? More on that on the next blog. Meanwhile get the compasses, maps and protractors out!